Hiking the GR5 from St Gingolph to Menton

15 days. 600 kilometres. A hike across the Alps from Lake Geneva to the Mediterranean in July 2012.
Route | Schedule | Photos on Facebook

Distance: 43km, Ascent: 2370m, Descent: 2050m, Time: 12h30m
I quietly crept out of the crowded dorm, and left the Plan de la Lai refuge at 6:39am. Damp, misty conditions gave way to dramatic cloud inversions as I climbed towards La Grande Berge. Soggy underfoot conditions to bypass grazing cattle at Lavachay meant I had soaking wet feet when I reached Col du Bresson (2469m). I removed my shoes and socks for while in an attempt to dry them out.

Below Refuge de la Balme, stretched out a long stony track which I attempted to run down. I missed a marker on the final descent to Valezan, and had to improvise to get back on route. By this time the temperature was really hotting up, and dropping down to Bellentre it was getting close to scorchio.

Disappointingly there was precisely nothing open in Bellentre, so I decided to cross the Isere river and head along the riverbank cyclepath to Landry.

However, when I reached Landry there also appeared, after much hunting, to be precisely nothing open either. I dropped into a grim little bar to get out of the sun, for a sit down and glass of Coke, and then started walking up the steep hill out of town. To my surprise, after only about a minute, I reached a campsite shop that for some strange reason was open. So I promptly stocked up, and had an impromptu picnic, allowing my shoes and socks to dry, before continuing into the heat.

The next section partly followed the main road, with a few short cuts through the forest. My plan had been to stop at Refuge de Rosuel (1556m), but when I got there I thought I might as well continue to Refuge d'Entre le Lac, which looked to be a far more dramatic and wild setting within the Vanoise National Park.

I arrived at the refuge too late for any food, so I just ate some bread and cheese and went more or less straight to bed. 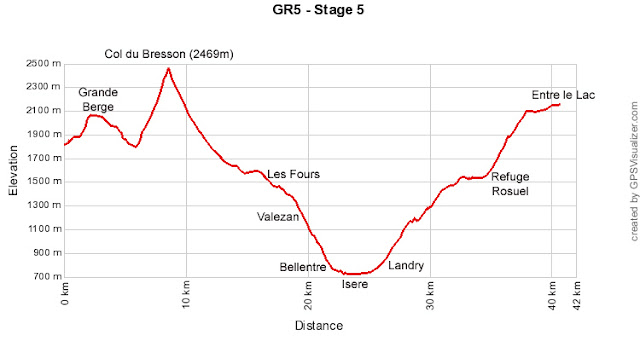 7. Roc de la Peche to Refuge I Re Magi

8. Refuge I Re Magi to Briancon